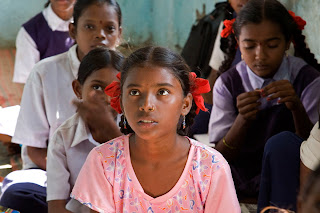 Micha X. Peled's documentary Bitter Seeds explores the answer to a shocking question: Why have 250,000 farmers committed suicide in India in the last 16 years?

To answer this question, Peled connects with a young, aspiring journalist, Manjusha Amberwar, from the farming village of Telung Takli who is trying to answer to the same question.   There have been a number of suicides in her small village, the first of whom was her own father.  While she goes door to door in her community finding answers, Peled weaves in interviews with representatives of seed companies, Dr. Vandana Shiva, and farmers' rights activists.

We see early in the film some representatives from the seed company bump into town in a nice SUV with blaring loudspeaker.  They've come to talk to the farmers about their Bt+ seeds.  These are genetically modified with Monsanto technology – no insects, big buds.  The farmers ask some pointed questions, which will haunt the film later.  The reps need not bother, there is in fact no other option available in India ever since the US, applying pressure through the WTO, forced India to open the door to foreign companies.

The genetically modified seeds can only perform under conditions of high fertilizer use, high pesticide use, and irrigation.  Farmers take out loans, first from banks then from illegal money lenders who charge exorbitant rates to pay for the seeds, fertilizer and pesticides.  But, for Bt seeds, applying pesticide must be timed with water application.  Since the majority of India's farmers don't have irrigation they are doomed to failure.  The seeds because they don't reproduce, thus having to be purchased every year, are not subject to natural selection and not at all suited to the local farming conditions.

Peled and Amberwar focus on farmer Ram Krishna Kopulnar whose trials are a perfect synecdoche of the Indian farmer's plight. Kopulnar, the worry on whose face is reminiscent of the character Antonio Ricci from de Sica's The Bicycle Thief, must have a good harvest this year so that his daughter “can go to school and have a good marriage.”  Daughters, though they seem to be well-loved, are a financial burden in traditional communities as marriages require large dowries.  The well-lensed beauty and dignity of the small village, where everyone is well turned-out despite the difficult conditions, allows the viewer to empathize with the shame a father must feel to have to give up his land to a money lender or to be rejected by a suitor's family because one cannot afford the dowry.   Suicide can seem the only way to free the family of debt burden.

The solution to these problems seem simple if the government were to get involved, yet the power of the forces pushing for the status quo – Monsanto, the US –  seem overwhelming. Bitter Seeds is the final movie in Peled's unplanned Globalization Trilogy which started with the much lauded Store Wars: When Wal-Mart Comes to Town and then went undercover into the textile industry in China with China Blue and has ended with the seed of the problem in the area of India where the cotton is grown for China's textile factories.  The trilogy goes from consumer to manufacturer to the producer of raw material in three major economic powers.  Peled said he had “the pleasure of doing one at a time” without knowing where this story would lead over twelve years, otherwise it might have been too overwhelming.

The film is showing in the Call2Action category of the film festival.  Local actions one can rally around in connection with the movie are the upcoming renewal of the Farm Bill in Congress, which subsidizes cotton farmers to the tune of 4 billion dollars in defiance of WTO law and keeps world cotton prices unfairly low. Also for the first time there are ballot initiatives in many states and counties for mandatory labeling of GMO food.  As Peled's documentaries demonstrate, it is all interconnected.
Posted by BradWeis at 11:11 AM