The CU @ BIFF pavilion at Shine was a big success! Here's one of the great events that drew a crowd Saturday -- [All photos courtesy Leah Masyotte] 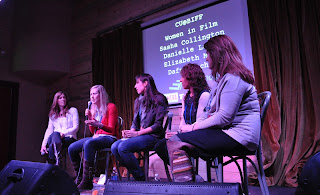 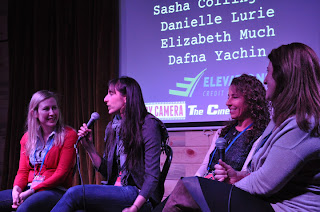 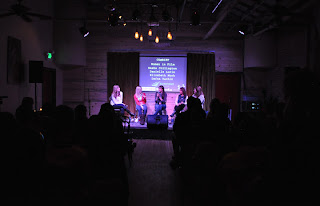 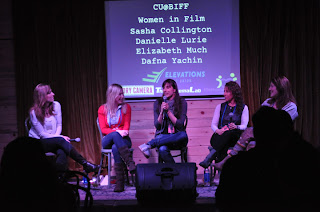 Posted by BradWeis at 6:56 PM No comments:

BIFF REPORT: Singing to God: A look at 'Defiant Requiem'


By the end of this remarkable film, you knew that the thick walls of Terezin, the ancient
walled fortress outside of Prague, heard the voices again. Voices that last sang seven
decades ago, voices that sang to honor the unmarked graves, voices that sang knowing
that God could not help but hear them. The voices of Jewish people imprisoned by the
Nazis, simply because they were Jewish. Terrorized, starved, murdered, simply because
they were Jewish. But they sang. Starving, cold, exhausted, they sang, every night in a
freezing cellar, led by a dedicated brilliant Jewish pianist, Raphael Schachter. Not only
did Schachter teach a group of 150 Jewish prisoners Verdi’s Requiem, one of the most
difficult pieces of music every written, he taught them in Latin and without a single
written note. Schachter, however, changed Verdi’s work from a Catholic mass for the
dead to a mass for dead Nazis, adding words of revenge, judgment and revelation. And
he translated the work to Czech, so that every singer could sing out that this was their
world, not the horrific world of Nazis. “We became different people in that cellar,”
said one of the survivors. And every viewer became a different person after viewing this
moving film.

Filmmakers Doug Shultz and Whitney Johnson brought two of the Terezin survivors,
Edgar and Hana Krasa, to Boulder. Speaking with heavy accents, they answered each
question in detail. As I listened, I remembered my parents’ heavy Czech accents. I
approached Edgar after the show, reaching for his hand. “Do you speak Czech?” I asked
in his native tongue. “I haven’t forgotten it yet,” Edgar answered, squeezing my hand.
And Boulder will not forget you, Edgar. Thanks for helping us what it means to sing to
God.
Posted by BradWeis at 3:22 PM No comments:


“Impeccable.” “Great organization.” “They really take care of us.”

Directors Patrick Shen (“La Source”) and Dafna Yelchin (“Digital Dharma”) raved
about BIFF’s care and handling of filmmakers. “At most festivals,” Patrick said, “the
organizers only want to fill seats. The filmmakers are ignored and left on their own.”
Patrick said that BIFF takes very good care of filmmakers. “Everything is arranged
so we not only have a chance to promote our films, but also meet other filmmakers,
view other films, and meet members of the community. BIFF handles all the mundane
details.”

Dafna agreed. “The Call2Action folks did everything! They did a great job marketing
the film. And they created a forum where I could discuss the film not only with fans, but
also with other filmmakers. It’s great having everything taken care of so well.”

Both filmmakers added that they loved Boulder’s small town feel. “Everyone is so
friendly,” Dafna said. Patrick captured BIFF and Boulder in one sentence. “It’s a great
vibe.”

Posted by BradWeis at 2:58 PM No comments:

WE TOLD YOU! The 2nd annual B.A.D. Party was an astonishing debauch! Here are some highlights --

Posted by BradWeis at 2:36 PM No comments: