Rock out with BIFF in Louisville on Jan. 30! 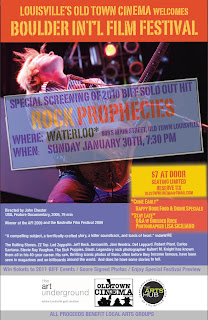 For the first time ever, the Boulder International Film Festival is expanding its reach! Come join us for a very special preview event in nearby Louisville on Sunday, Jan. 30.

That night, Louisville welcomes BIFF 2011 with a special screening of last year's hit documentary feature, "Rock Prophecies." It's the story of Robert M. Knight, one of the first to photograph Jimi Hendrix and Led Zeppelin, and the last to capture the image of Stevie Ray Vaughan. His 40-year career spanned the central decades and resulted in nearly a quarter-million images. His lively and engaging life and groundbreaking career fill the film to overflowing with energy and wit!

The event will be held at Waterloo, 809 S. Main St. in Louisville, at 7:30 p.m. Kathy Beeck, co-director of BIFF, will be on hand to present the film and a sneak peak of this year's festival picks. Festivities include food and drink specials starting at 5:30 p.m. and drawings to win free tickets to 2011 BIFF, as well as original prints of legendary bands taken by Boulder Theater photographer Lisa Siciliano ( who will lead a Q&A after the film). Presented by Old Town Cinema in association with Arts Hub, all proceeds go to The Art Underground supporting visual and performing arts in Louisville. Tickets are $7 at the door. For more information and to reserve tickets email oldtowncinema@gmail.com﻿.

Seating is limited, so reserve your tickets now! It's all about the FUN! 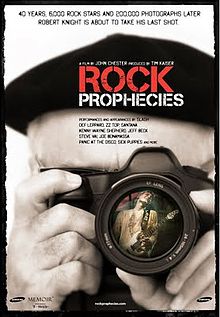 Posted by BradWeis at 3:50 PM No comments: