By Beth Kovacs, BCM BIFF News and Brad Weismann, BIFFDigiComm Director
The weather was cool but the jazz was hot as the Boulder InternationalFilm Festival kicked off its eighth year on Friday night. Once again, at thehistoric Boulder Theater, Bouldercelebrated its love for independent film.


The night started out with the musical stylings of the Hot Club ofBoulder jazz ensemble. The Big Red F Restaurant Group offered an array oftantalizing treats from local establishments as Jax Fish House and Zolo Grill,accompanied by wine from the Francis Ford Coppola Winery.


Soon the crowd was ready for the first film of the festival, “Darling Companion.” BIFF was honoredby the attendance of the film’s director, Lawrence Kasdan, and its producer,Anthony Bregman. Mr. Kasdan is known as the writer of “The Empire Strikes Back,”“The Return of the Jedi” and “Raidersof the Lost Ark” and as writer and director of the classics “Body Heat”and “The Big Chill.” Mr.Bregman is best known for producing such innovative films as “The Ice Storm,” “Thumbsucker,”“Eternal Sunshine of the Spotless Mind”and “Synecdoche, New York.” 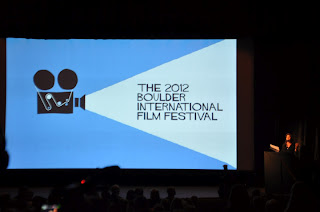 [Photo by Peter Wayne]
Mr. Bregman accepted the BIFF Award for Excellence inProducing, and he, Kasdan and Meg Kasdan, writer of “Darling Companion,” satdown with BIFF Special Event Producer and Host Ron Bostwick for a chat and a Q& A with the audience.

“When you make a movie, you have 100 people saying ‘No’before you even begin,” said Kasdan in tribute to Bregman. “But an independentproducer doesn’t care about those no’s.”
Bregman said of the audience, “You got all the jokes, youunderstood where the story was going – if we could just package you and put youin every theater in America. . . “
Bregman descried his approach to producing as “director-driven”and lauded Kasdan as his moviemaking hero since Bregman was in junior highschool. Bregman described the creation of “Darling Companion” as a labor oflove for both him and Kasdan; the performers in the film, who included DianeKeaton, Kevin Kline, Dianne Wiest, Richard Jenkins and Sam Shepard, worked forbelow their usual rates and everyone got used to shooting three to four pages aday, as opposed to a customary two.
As to the mechanics of financing an independent project, Bregmantalked bout the delicate negotiating need to bring financing and talent together.“The money wants to know what the package is, and vice versa,” he stated.


Lawrence Kasdan described his big break, the opportunity tocomplete the script for “The Empire Strikes Back,” as follows: “George Lucassat down with me and said, ‘You know . . . .Darth Vader is Luke’s father.’ AndI said, ‘No shit!!?’ I’m in!” He went on to talk about his many projects,circling back to describe his inspiration for his career as his viewing of “Lawrenceof Arabia” when he was 13.
Bregman countered with his story of inspiration – the lastscene of “Raiders,” when the box containing the Ark was hidden away in a vast government warehousefull of similar containers.
“I realized that each of those boxes was a story, and thatthere were thousands and thousands of stories to be told – and I just had tohelp tell them.”
Posted by BradWeis at 4:20 PM