BEHIND THE SCENES: Curtains at the Church 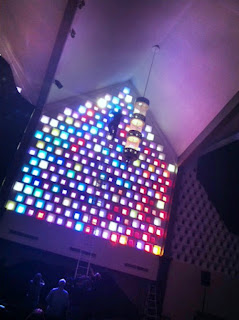 (Editor's note: Until now, this amazing story has not been told. Thanks so much, Donna, for documenting it and sharing it with us!)

It was at once exciting and harrowing -- the perfect give-and-take of comedy and tension. There was a mishap when a cable broke, then a hero performing a crazy stunt on a 40-foot ladder, and, at last, a happy ending. And that was all before the first movie even played at 2012 BIFF.


The festival kicks off tonight, but, as you would imagine. much has been going on behind the scenes to make it happen. Including this one thing that you might not even believe if you we didn't tell you about it. 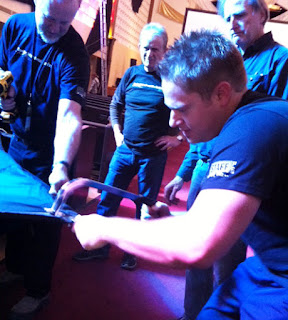 One of the venues for BIFF each year is the First United Methodist Church at the corner of 14th and Spruce. The sanctuary features exquisite stained glass windows spanning 45 feet in height. The kaleidoscope of light they cast is perfect for church service, but not ideal for showing a film.  When the problem was first recognized a few years ago, BIFF executive producer, Kevin Smith, drew on his experience as a stage production designer, and enlisted the help of local artist, George Peters, to craft an ingenious solution.
"Kitemaker is one of my jobs," Peters said in a discussion earlier today. "My partner and I travel around the world with our kites and try to fill the sky with color." When asked how he became involved with the project, Peters stated, "Kevin knew a friend of mine and when he called me to talk about it, I said yes without hesitation. That's one of my biggest faults. " he added, laughing. 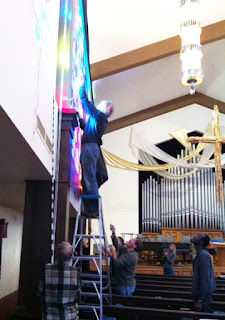 "I love the wild, crazy and wacky idea. It keeps going on in your head until you gotta do it," Peters said. His idea involved 850 yards of fabric, thousands of feet of rope, pulleys and more than a few brave souls.

"One woman sewed them all together," Peters said, "she was working in a tiny room, maybe 10 x 6, just surrounded by all of this fabric. Then it was really an engineering problem. How could we lift these heavy curtains into place without having multiple people on 40-foot ladders? The trick was starting the ropes in the tip-top position." 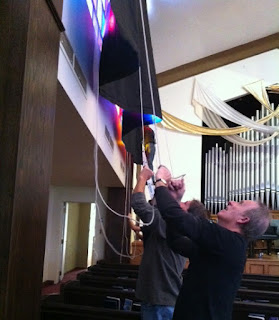 BIFF's Kevin Smith added, "We hired a construction company to drill the holes for the pulley systems. We had a guy as high as the ladder could go, as high as he could stand, as high as he could reach with a drill. That’s how we decided where the top hole would be."
The curtains were produced a couple of years ago, now, before each festival,  they have to be transported to the church . . . and installed. And, that is something that is truly awesome to watch in action. Twenty volunteers stand on ladders, tiptoes, and backs of church pews. Like a ship's crew hoisting a mast, they work the pulley system together until each curtain is in place, shrouding the church in darkness so another festival can begin. 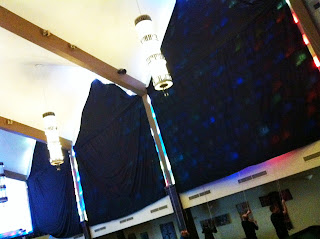 Then, after the final film plays on Saturday, they all come down again before Sunday service the next morning. 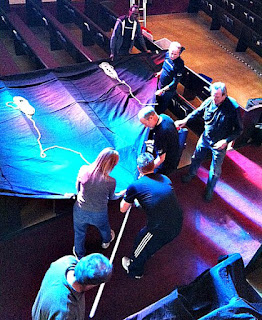 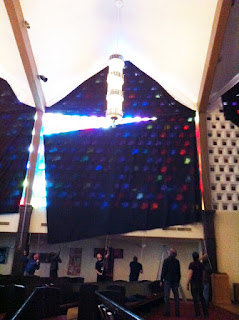