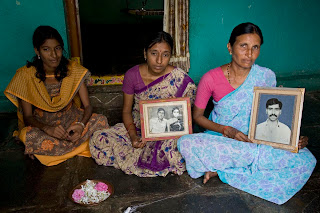 BIFF in the news: once again, as with "Pink Ribbons, Inc." and "The Island President," yet another topic that has been covered in a BIFF 2012 film has hit the front pages.

Check out these HuffPo links regarding Monsanto -- in one case, the biotech giant has been found guilty of poisoning a French farmer; in another, its genetically modified corn has been linked to organ failure in rats.

"When aspiring reporter Manjusha Amberwar's beloved father becomes one ofthe 250,000 farmers in central India to have committed suicide, she beginsan investigation. She learns that conventional cotton seeds have been phasedout in her lifetime, and that the multi-national corporation Monsanto's loftypromises for its genetically-modified cotton have since given way to harshreality. In order to buy the expensive new seeds, Indian farmers had to mortgagetheir land just to plant a crop. But because the new varieties are toowater-hungry to produce a dependable crop for dry central India, hundreds ofthousands of farmers are losing their land. Outrageously, the U.S. governmentoriginally forced India—through the World Trade Organization—to acceptGMOs, and has been forcing WTO members to do the same thing throughoutthe world."