BIFF 2013 Kicks Off with Flair and Changes

The 9th Annual Boulder International Film Fest kicked off its opening night with the likes of Darth Vader and Glinda the Good Witch. It’s traditional that the festival begins with a gala, in the past held at the Boulder Theater. This year’s gala was held at not one but two new locations. Filmgoers, sponsors and filmmakers were treated to music and entertainment in the form of Hollywood nostalgia. Actors from the Boulder area brought film alive. Mingling with guests were volunteers costumed as film characters such as Alice’s Mad Hatter and Groucho Marx.

Festival co-founder and Executive Director Kathy Beeck said that the Festival was looking for a different approach to the evening and the actors brought the “color and flavor” of Hollywood to Boulder. Actress Mary Bevington, a regular BIFF attendee, saw a chance to put her MFA from Naropa to good use and “hopped on the opportunity” to play Eliza Doolittle from My Fair Lady. 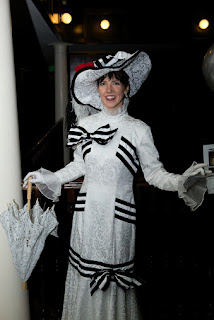 The Colorado premier of Muscle Shoals, direct from the Sundance Film Festival, followed the gala. The film focuses on the birth of the Muscle Shoals sound in a small Alabama town that became so important to R&B and Southern Rock music. Boulder resident Freddy Camalier directed and produced this moving film that looks at racial hostility and how music can bring people together, regardless of color.

The film festival will showcase 47 films between Thursday and Sunday. According to Ms. Beeck, this year’s festival is on track to meet, if not accede, last year’s attendance of 19,000 attendees. BIFF will run through Sunday, February 17th. Tickets are still available. Check out the BIFF website, www.biff1.com, for more information.
Posted by BradWeis at 8:03 PM