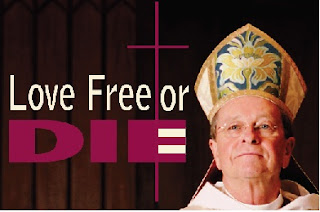 Love Free or Die: How the Bishop of New Hampshire is Saving the World is not just a film that chronicles the trials of Bishop Gene Robinson of the New Hampshire Episcopal church as "the first openly gay bishop in Christendom." It is a film about social injustice. It is a film that, inevitably, unavoidably, and purposefully, directly addresses gay rights within a religious frame.

Many in the LGBTQ community struggle with a sexuality that is not accepted by their religion. The director of Love Free or Die, Macky Alston, has a personal connection to the film and the subject. Growing up, religion was the family business, and several generations of Alston men were ministers. But as a gay man, Alston wrestled with the conflict with his faith, the lack of acceptance, for years.

To the question, "Who are we to change 2,000 years of thinking?" Bishop Robinson responds, "Why not us?" This was "something I needed to amplify," says Alston.

"My rights, my freedom, my ability to have my husband and my children, is a fight that's taking place on a religious battlefield," Alston said during the Call 2 Action discussion following the film. "The frame is a religious frame."


There is still much resistance within the religious community, and the United States as a whole, to acceptance of LGBTQ individuals and same-sex marriage. "People who love us still vote against us for religious reasons," Alston points out. A change in viewpoint can be extremely difficult. For many people of faith, if same-sex marriage is acceptable, "then everything they've ever believed is wrong. People are wrestling with this stuff, and need help," said Alston.

An important point made by the discussion panel was that people cannot be expected to shed their religion. Acceptance of gay and alternative lifestyles must tally with religion doctrine, and emphasis must be placed on accepting people, and not accepting injustice.

In Love Free or Die, through the efforts of Bishop Robinson and many others, we see the Episcopal church bless gays and lesbians, not only as members of the church, but also as eligible for appointment to official positions, such as bishop, and same-sex marriages. For Alston, this was "God's dream coming true, and certainly mine, and I believe Gene Robinson is right."

Later in the nearly hour-long discussion, Alston added simply, "What it takes to be a moral person is to live justly."

More information can be found at www.livefreeordiemovie.com.