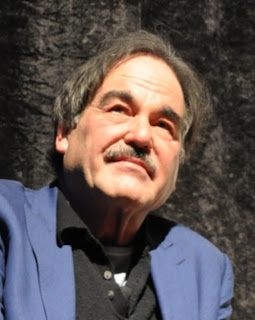 “I’m too young for this,” quipped Oliver Stone as he accepted the Master of Cinema Award from the Boulder International Film Festival on Sunday night, Feb. 20 – Closing Night at the Festival. 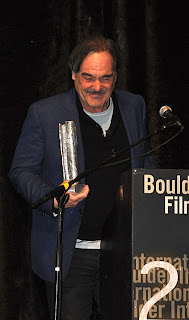 The big-framed, genial filmmaker joined the throngs at BIFF 2011 -- taking in some films, visiting around town, and then homing in on a Vielehr statuette and a long, fascinating conversation with BIFF Executive Producer of Special Events Ron Bostwick (who intrepidly scanned all 5,400 minutes of Stone’s filmic output as part of his preparation for the tribute).
The 64-year-old director, a three-time Oscar winner (as screenwriter, for “Midnight Express,” and as director of “Platoon” and “Born on the Fourth of July”), said, of his career-achievement honor, “This is not the end. This is the middle of the middle, not the beginning of the end.”
As he moved across the Boulder Theater stage to sit and chat with Bostwick, dozens of little glowing screens popped to life in the audience, viewscreens of cameras and video recorders, snapped on to drink in the sight and sound of the honoree. 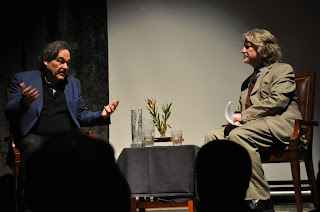 Bostwick began the discussion asking Stone about the possible internal conflicts he faced when, as Stone has, he wore the hats of producer, director and writer of a given film interchangeably.
“I am conflicted,” Stone said. He talked about his self-termed Jekyll/Hyde impulses, explaining that his first name is William, his second Oliver, and that “the last psychiatrist I had theorized that William is the good boy and Oliver’s the bad boy. And Oliver does these things that William can’t stand – it creates tremendous tension, and out of that has come some fertility.”
Of his time at NYU, studying partly under Martin Scorsese: “Terrific. To major in film was new at the time, and we were in the first classes about this new medium . . . he (Scorsese) was tough. But the fellow students were the toughest! The chimpanzee bloodbath. It prepares you for the worst – which is what we experienced.”
He cited the incessant practicums in filmmaking at school as essential to his education. Each week, a team of students would make a film, trading functions such as actor, producer, writer, director, cameraman. “It was a good and rigorous way to learn,” he said. Ironically, the older, less wieldy pre-digital technology made the experience more rigorous.
“It was expensive – we couldn’t make many mistakes,” Stone said.
He recalled that it wasn’t until years after his experience as a combat soldier in the Vietnam War that he began to really to process, contemplate and understand it. During the filming of “Salvador” in 1984 the parallels between what was happening there and what happened in Vietnam were disturbing to him. 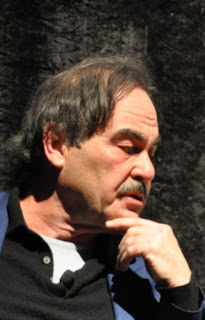 “It seemed such a repetition of Vietnam,” he said. “South America keeps coming back like a reminder, in my life.” Stone filmed documentaries on the region: “Comandante” in 2003 and “South of the Border” in 2009.
Of his political awareness and contrarianism, which has been stereotyped by the press as a paranoid, conspiracy-theory-ridden mentality, especially after the release of his 1991 “JFK” film: “I didn’t seek it out, it kind of happened. It (his war experiences) gave me a strong sense of outrage, a sense of hypocrisy, of the government’s use of violence. Even to this day I have anger – plus, I have more money now so I pay taxes to buy these fucking bombs!”
He was asked about the remarkable percentage of actors in his films who have nominated for Oscars for their performances. Stone credited the performers for the merit of their work. “Each one of those actors was at the cusp of change,” Stone said. “Actors are always dying to redefine themselves.” Parenthetically, he said, “Never tell an actor he is just not right for a part. He will hate you for the rest of his life.”
Of the Oscars itself, Stone said, “I think of it as a wonderful parade and let it go. It’s very much a fashion show.”
Stone’s credo when it comes to his work is: “Make the movie – lie and steal and cheat – make the fucking movie.” He also reserves the right to go back and improve work that he feels wasn’t up to snuff, citing his 2007 director’s cut of “Alexander” as time well spent getting to tell the story in the way he intended. 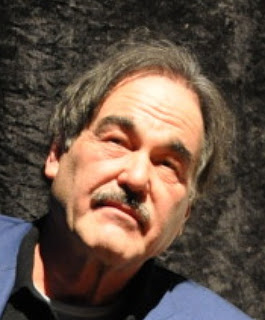 He also admitted to being scared off projects from time to time – listing one concerning Martin Luther King, and another concerning the My Lai massacre, neither of which saw the light of day.
Bostwick played a second highlight reel for Stone – one that showed Stone performing in numerous cameo roles in his films. Of them, Stone said: “It’s fun to throw myself into my films. You cross the barrier and see what things are like for the people on the other side of the camera. It helps to loosen you up.”
When asked if he was ready for one more clip of one of his performances, Stone joked, “It’s not a porno film, is it?” It turned to be Stone’s brief turn as a conspiratorially-minded version of himself on Larry King’s TV talk show in “Dave,” the 1993 comedy that involves a nice-guy double for a curmudgeonly President taking his place. Stone is the only one who notices the switch.
“Don’t you think you should point out that I’m the only one in the film that turns out to be right?” Stone said, eyebrows cocked. 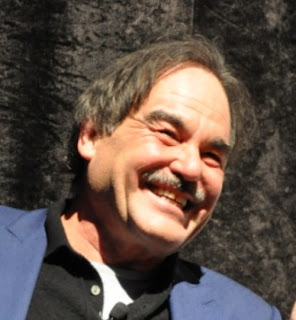 Of his experience writing the script for “Midnight Express,” Stone said that part of the script came from his own personal experience. He stated that he had been busted for drug possession eight days after returning home from service in Vietnam. “It’s disgusting hypocrisy – busting people for grass,” he said to great applause.
Stone outlined the underlying themes of his films as interrogations of the American ethos. He paraphrased Roman satirist Juvenal, saying, “Luxury corrupts far more ruthlessly than war,” and went on say that, in many of his films, he is asking “’Who is the bad guy here?’ Who is the bad guy, Nicky and Mallory (the mass-murderer central characters of his 1994 film “Natural Born Killers”) or the state?”
Riffing on his experience in Vietnam and its relation to his film “Platoon,” Stone disagreed with the general worshipful assessment of the “Greatest Generation,” stating “These guys behaved so arrogantly (in Vietnam) . . . And don’t forget, people make money in war – the PX system is corrupt like Vegas. ‘Air America’ (the 1990 Roger Spottiswoode action/comedy that indicted the CIA for enabling drug trafficking during the era) is pretty accurate. Fuck the Wall Street Journal (which published an editorial stating that the film was an affront to the memory of the soldiers who fought and died in Vietnam).”
Stone then declared that he hoped no one was blogging in the audience. Those around me turned to me and laughed nervously. I grinned with clenched teeth and kept typing. 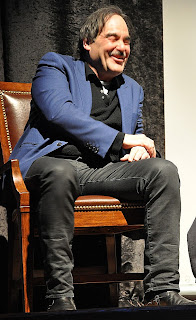 Stone then spoke positively about Rupert Murdoch, owner of the Journal and global media lord, as a person, though, stating that “Nothing’s black and white except maybe Roger Ailes (president of the Fox News Channel).”
Stone continued, “The major mainstream media is really screwed up and has put a bubble over this country. It’s not a democracy. If someone runs for office, he doesn’t have to win us -- if he wins the media, he wins the election.”
How can it be changed?, Bostwick asked.
“Get the airwaves back,” Stone replied. “Don’t give licenses to the biggest barons with money. Keep the real, free airwaves for the people. Media tells you what’s good, what’s bad, what to think . . . down beneath the media, it’s another world.”
Stone stated he was delighted with his visit. “I think Boulder should secede,” he said. “The Republic of Crazy, that’d be great! And then Steamboat Springs would jump in. Before you know it, there’d be a civil war between Aspen and you.” 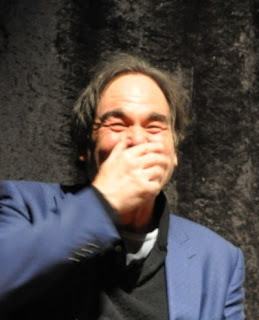 Discussing his 1993 film “Heaven & Earth,” Stone said it “changed my heart. It was a chance for me as an American solider to look through the eyes of the people of Vietnam. That and ‘Nixon’ were my two biggest commercial disasters.”
He described the critical drubbing he took on “Heaven & Earth” as due partly to the difficulty of reviewers to grapple with overly spiritual material.
“Critics have a very hard time, ‘cause it’s a leap of faith. If they buy into it, they risk looking foolish on a spiritual level,” he said. As to “Nixon,” he said, “A man in a terrible suit glowering on a poster with a bunch of men in bad suits and bad haircuts is not a crowd-pleaser.”
When discussing how technology has changed the practice of experiencing a film, Stone stated first of all that “I loved road shows when I was a kid – four hours with an intermission!” (Roadshow theatrical releases, particularly popular from 1952 to 1971, we one- to two-a-day showings of widescreen epic films such as “The Ten Commandments,” “The Alamo” and “Lawrence of Arabia.”) “I love big dramas, I love Vincente Minnelli.”
Stone called Blu-ray “the last hardware.”
“This is your last chance to own a movie,” he said, surmising that non-theatrical audiences will in future order films online and download them, losing direct access to the created work. With the purchase of a concrete object that contains a given film, Stone said “You’re a possessor, you’re a collector,” and spoke of that warmly, stating by analogy that owning a library of films is satisfying, akin to “having a book on a shelf.”
Stone spoke of his upcoming documentary series for television, titled “Empire: the Forgotten History of the United States.” It tracks America’s military and foreign policies from World War II to today, postulating the errors that led in the view of some to the triumph of the military/industrial complex warned of by Eisenhower.
“We veered off into this national security state thing,” Stone said, and citing presidents such as Truman for their lack of intelligence in failing to prevent the tendency. 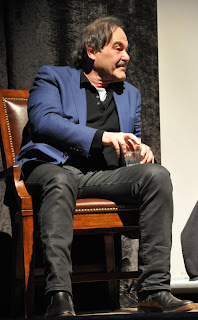 “There’s a mythos of Truman as this smart, tough little guy,” Stone said,” but I think we’ll eventually realize that he was as stupid as George W. Bush.”
Questions from the audience followed the interview. When asked by one young filmmaker, “Can you tell me what mistakes you made so that I don’t have to repeat them,” Stone replied, gently, “You have to make your own mistakes.”
Another aspiring filmmaker, now an enlisted person, asked what he should make a movie about. “Go to the Pentagon,” Stone said. “Make a film about what you know.”
When asked what kind of comic-book-character film he might make if were so inclined, Stone reminded the questioner that he had written the original script for “Conan the Barbarian,” and then said, “Why would you want to do that? Aren’t there enough of those films already? Make something else!”
When asked what thought of critics, he said, “Some of them should die,” then revised his statement, saying that writers such as Roger Ebert were to be praised for their intelligence and constructive criticism.
However, he went on, “They’re (bloggers are) looking for eyeballs and they’ll say anything. The thing I want to ask them is, ‘Are you happy in your soul? On your deathbed, do you think how many lives did you fuck up?’ In my mind, love is the only criticism. Think like a parent – point out the ways the child can improve his behavior, don’t trash him.”
After an interlude during which various audience members tried to convince Stone to make a film supporting their beliefs or causes (“I can’t chase every cause,” he explained, again gently), he was asked about the roles of festivals in promoting film.
“I love them,” he said. “Boulder, or Cannes, festivals are great. You get to see things you’d never see otherwise. Films like ‘The Edge’ (by Aleksi Uchitel, 2010) which we saw last night. Plus, it’s a nice place to give awards to old-timers,” referring ironically to himself. 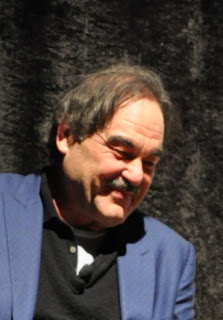