From the field: BIFF talks to the filmmakers

Katelyn Hauge-Aldridge talked to many folks yesterday at BIFF -- here are just a few of her interviews! 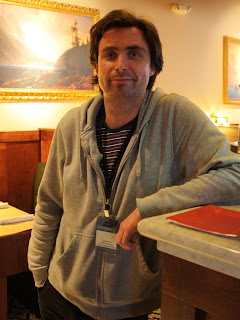 At the VIP dinner at Ted’s Montana Grill on Saturday, we caught up with Norwegian filmmaker Tomas Sem Lokke-Sorensen. The Boulder International Film festival is one of Lokke-Sorensen’s many stops on his tour of film festivals around the world that are screening his short film “The Unhappy Woman.” This five-minute comedy/drama focuses on a dialogue between an actress and a director, whose conversation quickly turns from business to personal, and ends very unfortunately for a certain camera operator. The film has already gained recognition within the film community -- it was the winner of the 2010 Aspen Shortsfest: Best Short Short Award in April of 2010.

For Lokke-Sorensen, this film was a challenge to his talents as a filmmaker.

“The film is shot in one scene with no cuts and only two actors,” said Lokke-Sorensen. “It was a challenge to myself. We shot for only one and a half hours total. It’s a very simple film that shows how people must learn commitment and communicate to avoid arguments.”

This film has brought Lokke-Sorenson to the United States for the first time. When asked about his impressions of Boulder and the community of filmmakers who have gathered here, the filmmaker had nothing but good things to say. “The people here are very friendly and love to have fun. It’s a great community.”


Filmmaker and actor Henry Phillips brought his feature-length film “Punching the Clown” to the Boulder Film Festival this year. In his semi-autobiographical film, Phillips plays a performer/comedian who rises to fame in Los Angeles due to a series of misunderstandings. But his fame doesn’t last long and after becoming the victim of a terrible rumor, he is run out of town.

“The film is sort of a metaphor for myself,” said Phillips. “It was inspired by a series of my own life stories that I told to director Greg Vienz. Its sort of autobiographical, but the stories are over exaggerated for the film.”

Phillips screened his comedy for Boulder Film Festival audiences on Friday and received an incredibly warm reception. As an independent filmmaker, Phillips hopes that the screening of his film at the festival will help bring his film further recognition.

“We have basically no ad budget, so we have been showing the film at festivals to spread the word about the film. We have a lot of great support from musicians and comedians, and we are hoping to broaden our adudience,” he said.

Phillips’ film is now available on Netflix and Amazon, and clips of the film are also available online. 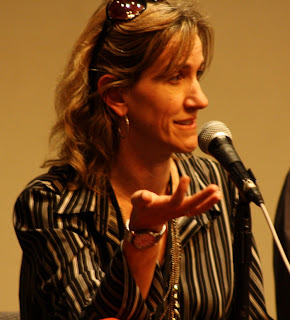 Saturday’s filmmaker panel brought a wide variety of voices and views to the Boulder Film Festival -- from independent filmmakers to Disney producers. Among these was documentary filmmaker Suzan Beraza, whose film “Bag It” was screened earlier that day.

Beraza’s film is a “quirky and approachable documentary” that focuses on the impact of the use of plastic products in today’s society. Originally, Beraza intended only to make a short film about a competition between the towns of Telluride and Aspen, CO to reduce use of plastic bags in 2008. However, as Beraza learned more and more about the subject, she quickly became passionate about plastic and the repercussions of its use on the environment and chose to expand her documentary’s focus to create her first feature-length film. Beraza’s film has been screened at several film festivals across the country, and was the winner of the Best of Festival Award at the BLUE Ocean Film Festival in Monterey California in 2010.

As one of six filmmakers on Saturday's panel, Beraza was happy to be part of the variety of talent who spoke about what they are most passionate about -- film.

“I really liked the variety of people that were on the panel. It was a great way for the audience to connect with us about all the dimensions of making a film,” Beraza said. “There is no one right answer to how to make a film. The process is different for everyone.”

Clips of Beraza’s film are available online, and it will be aired on PBS in April of this year.
Posted by BradWeis at 2:41 PM

Email ThisBlogThis!Share to TwitterShare to FacebookShare to Pinterest
Labels: filmmakers