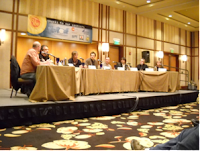 After the symposium, attendees were invited to view Hahn’s documentary, Waking Sleeping Beauty, which screened at the Church at Friday night.
Posted by Daily 1 Sheet at 9:59 AM